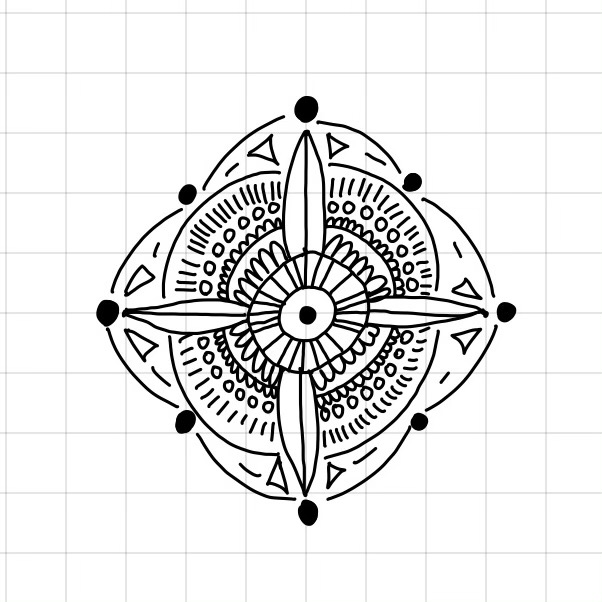 Thanks to a recent Trauma-Informed training I took with Cheryl Walters, MS, Psychologist, I learned that mandala art regulates the nervous system because when you create mandalas you are using both sides of your brain.

I thought that mandalas would be perfect for week 3, and found a great resource on art-is-fun to use. It takes you step by step.

When I was recording an “intro” video, I found myself I busting a myth that I see going around over and over again. I was geeking out on the science of polyvagal theory, talking about emotions from the “top-down” and “bottom-up,” professing at least once that IFS will fix the world (I actually had to cut a lot out), kissed Dr Barbara Frederickson’s book on the lips because I love it so much, nearly died of fallen-asleep-feet, played with puppets (I cut that part out too… It was a “puppet” of the brain regions), swooped up a chihuahua and more. (The “intro” video came out so long that I moved it into its own post here.)

It’ a great idea to recycle any round objects you find for use in art creation… For example, I bought a small coffee pot for when I have clients over, and I realized that the cardboard was perfecto! I had also been saving other small container lids, etc.

Using that packaging was great because I could see where my circle was going to be in relation to the first circle.

After that, I asked Alexa to play Mozart and I got to coloring.

And then… as anyone who met Bella knows… I didn’t want to get up, even though I was done. I took the opportunity to play around with some of the filters that are built into my phone…

As another example for “recycling,” I noticed that this tissue box had quite the enticing grid on it, so I found myself doodling a mandala.