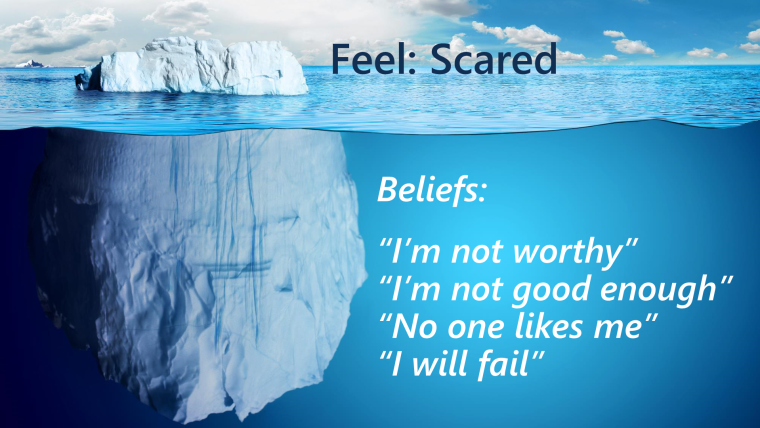 Pro Tip: Take a Peek “Under” Your Emotions/Feelings!

Say what? Well, if you listened to our latest podcast featuring Julie Bear Don’t Walk, you’ll recall that Julie talked about the signals that our body gives us. It’s all signals: Pain. Emotions. Bloating. Fatigue. Fogginess. We should greet these signals with the C word. (Compassion.) And the other C word (Curiosity.)

These signals are a means of communication. Our body and our mind helpfully (sometimes “helpfully”) communicate messages to us.

We can peek “under” things with compassion and curiosity loving inquiry. We can peek under a thought for example. We can peek under and emotion. What can we find there? Well, lots of things. This post will cover a couple examples as to what we may find when peeking under our emotions/feelings.

One of type of signal may experience at surface level could be a feeling. But what is a feeling? Well, we feel sensations (body sensations) and we feel our emotions. As I biochemist, I also write a lot on the topic of affective neuroscience:  the study of the neural mechanisms of emotion. At the “lowest level,” if you will, there’s proto affect (molecular actions / interactions) which “bubbles up” to affect (the movings and shakings of emotional circuits, or neurons deep in the brain), which “bubbles up” to emotions (neurons within these affective circuits fire when action potentials are triggered), which bubble up to feelings (more of a mid-brain response now), which bubble up to associations and thoughts regarding WTF is going on (now the executive brain is on board). You can see this bottom up route here (and below).

Incidentally, I like that neuroscientist Antonio Damasio uses the phrase “largely non-conscious” when describing how emotions get translated into feelings. Rather than taking time to “think right,” you “act right.”

Peek “Under” Your Emotions Example 1

These days I tend to get complimented on my “energy,” warmth, and shiny eyes. Recently I came home to my apartment complex to find that someone had parked in my assigned spot. I became instantly furious and enraged. It was so different from my usual state of being that I had to stop for a second and assess.

It’s kinda cool how you can be SO MAD and yet witnessing it all from a level beneath like “Whoa, I haven’t seen rage in YEARS. What is going on here?” In my curiosity, I deemed that I must’ve triggered whichever of the 7 “Emotional Systems” tapped into territorial rage (spoiler alert: it was the RAGE system)… 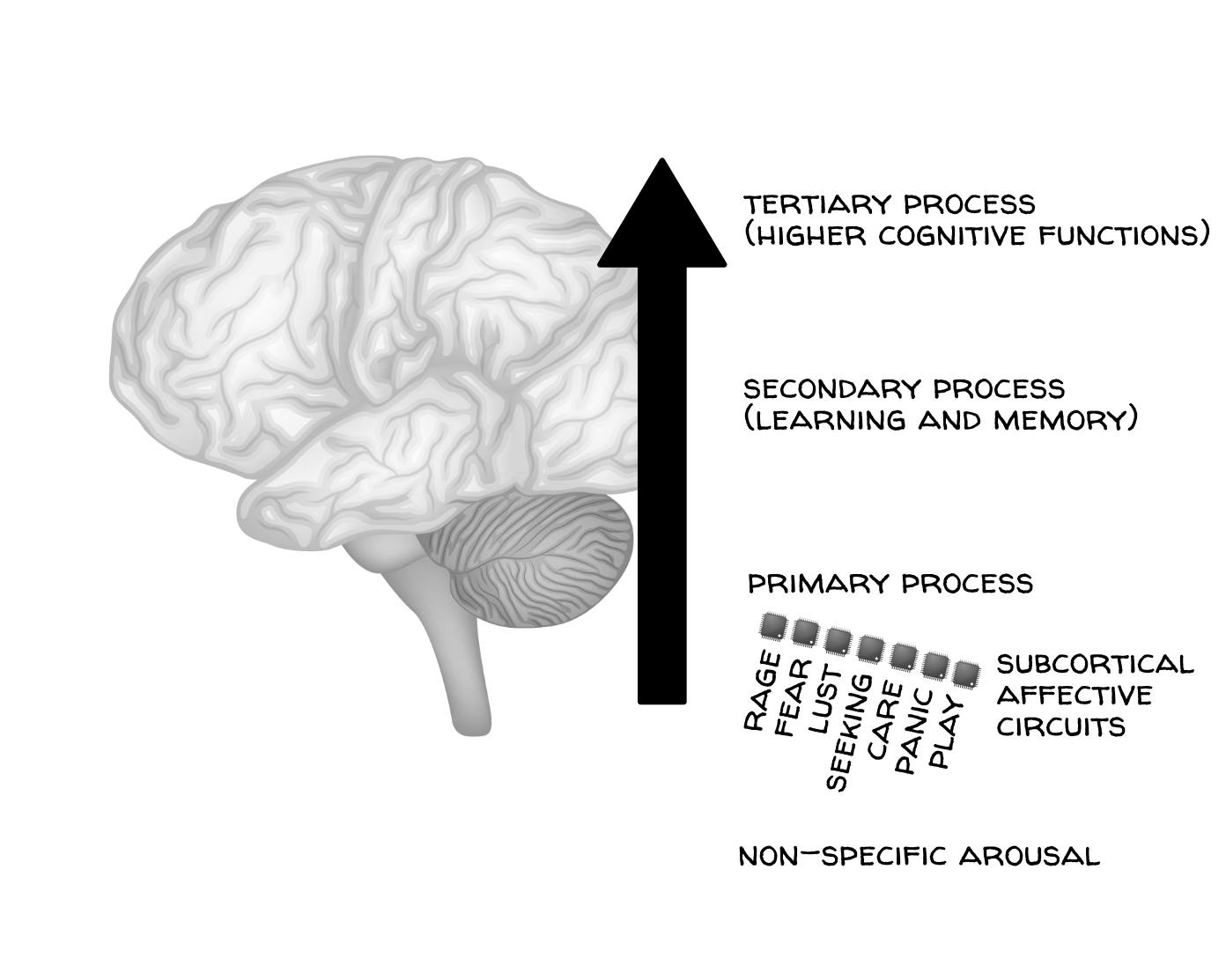 By seeing the car in my spot, I tripped the RAGE system way down in the bellows of my brain. Luckily I noticed that this was “not like me” to be blood-boilingly-angry,  and that I liked my loving yogi, shiny-eyed self better. And then I moved beyond curious — I was downright amused. I was suddenly back to neuro-positivity. And I was back to being kind (versus choosing kind).  Even though the leasing office wanted to tow the offensive vehicle I took another lap around and noticed a note tucked under the windshield of a different car. I called the number on the note, and no one answered. The leasing lady had tow trucks in her eyes (the way that cartoons get dollar signs in their eyes). I left a message. Then I left a text. A little while later I got the most apologetic call ever. The woman who accidentally parked in my spot offered to buy Lyft for me. (How would that help? I have no idea. But it was sweet. It’s also a good demonstration of how blood flow in our brain changes when we get stressed out: our prefrontal cortex gets diminished blood flow… hence a nonsensical idea like getting someone who needs to park her car a Lyft.) I told her not to worry about it, I am sure I accidentally parked in someone’s spot and that she should think no more of it and go on to enjoy her weekend. She was floored by my kindness and expressed as much.

In this case, when I “peeked” under the emotion I was feeling, I found that I had tripped a tripwire in a very primal circuit. RAGE!!!!!

Peek “Under” Your Emotions Example 2

Other times when we look “beneath” an emotion, we may be peeking at a belief. Sometimes beliefs are helpful. Other times they are “helpful,” meaning not actually helpful (though everything our bodies and minds do, has helpful reason or intent behind it). Typically these are called “limiting beliefs,” as they are limiting us from being awesomesauce. The beliefs may be conscious or subconscious. (I’ll add a long list of limiting beliefs at the end of this post.)

So beliefs that we own are not even ours. When we hear something over and over and over, our subconscious mind helpfully/”helpfully” will deem it true. This is called an implicit belief. We believe things we didn’t even choose to!

As you scan through you might be thinking “Nope, no, no, ahhhhhh, a-ha… maybe…” This is one way to find limiting beliefs — read them off and see which ones resonate with you, and then address those. But when you are playing “peek-a-boo” under an emotion, different emotions typically point to different families of beliefs: the beliefs you find under a “dread” rock are likely different than the ones you’ll find under an “angry” rock. Keep that in mind when you play peek-a-boo. There can also be a belief under the belief. For example:

Belief “under” that belief = I am afraid to put myself out there and grow, and saying “I don’t know what I want” lets me play it safe (albeit stagnant and unfulfilled)

Below I have compiled a long list of limiting beliefs. You can see which ones resonate with you. You can listen to the audio, or read through the list (or do both). See which ones spark a little twitch in your gut, a thought of agreement, etc.

So what do you do when you find a limiting belief? Say I realized that my subconscious belief was “I’m not worthy.” In order to transform this “helper” into being a true helper (yes, “helper” — because all of our beliefs came about because our minds thought they would be helpful to us), I need to truly be unburdened by this old belief and adopt a shiny new belief. I need to say it. I need to feel it. I need to try it on for size, and just as a shoe molds to my foot, this belief needs to mold to my heart of hearts… It needs to ring true for realz, versus being some words I chant even though I don’t deem them true with every bone in my body. 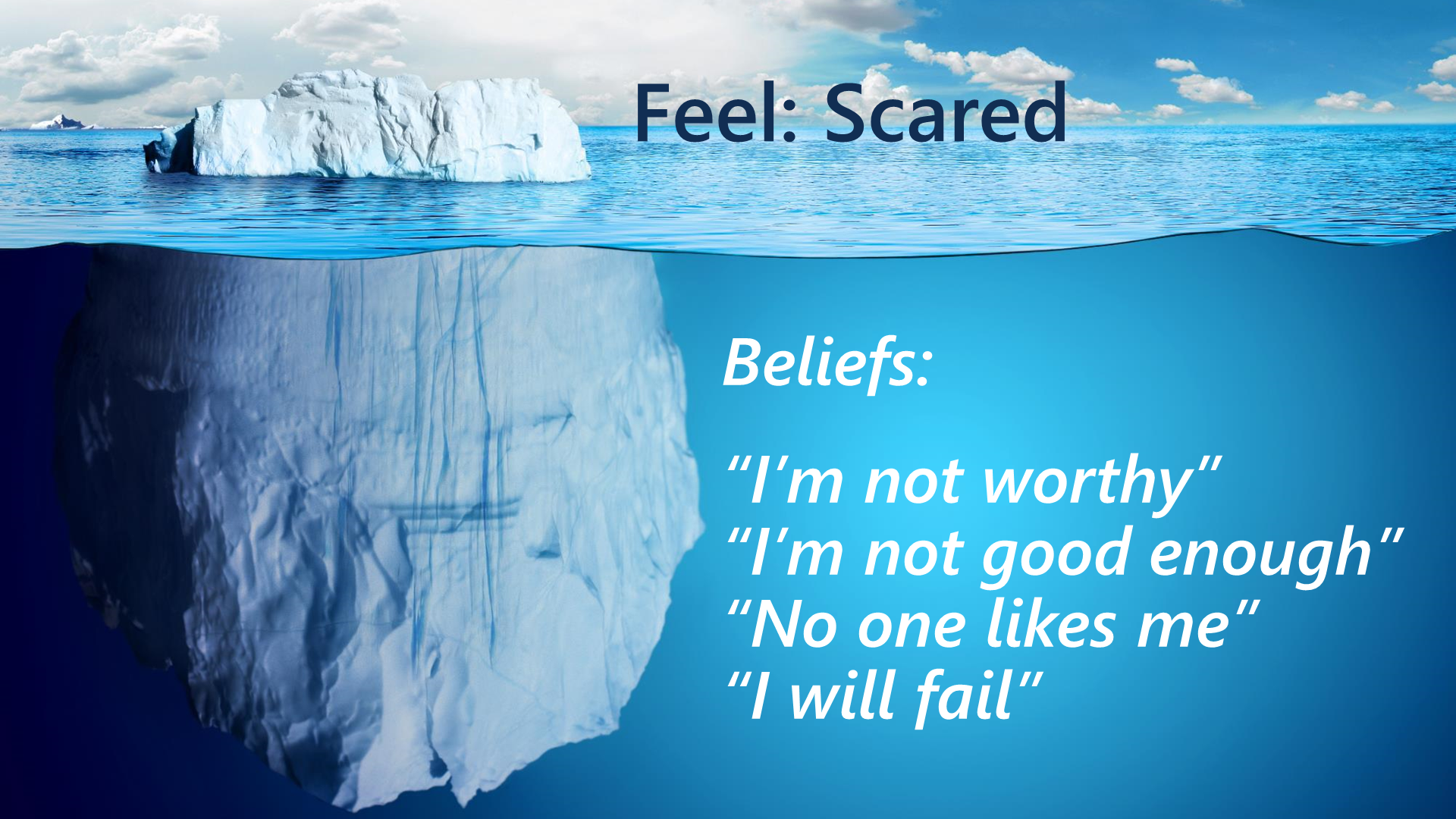 Sometimes the new belief you want to believe doesn’t really get deemed as true by your insides. It simply doesn’t seem like an obvious truth. It doesn’t feel like it (in your body), you don’t really think it’s true. It’s just not sticking. In other words: You mouth might be saying it, your brain might be thinking it, but your body says: nope!

In the past, one method that helped me was to downsize the new belief. Updating “I’ll never make money doing what I want to,” as a belief to believing I could make $250,000 a year didn’t ring true for me. A coach suggested that I take that number down until it felt true. At the time I was making a career change, and though prior to this I was making well over 6 figures as a sellout, the number that felt believable to me in my new endeavor was $75,000. (Guess who then took a new full-time role on her new career path, starting at $75K exactly? And this was for a role that spanned $45K – $110K on salary.com. The company literally offered me $75K, the exact number I believed I could start at.)

Other times instead of downsizing the belief it helps to say “I am in the process of believing that I can make money as a ______.” Part of what my parents modeled was that you had to hate your job, work hard, have a sucky commute, and that showed how much you cared about your family. You had to sacrifice. You had to hate it. That’s what familial love was. Being able to make a living doing something that was connected to my values, purpose, senses of fun and contribution was an idea that was buried inside of me under beliefs of needing to suffer to show you care, to gain worth.

“I’m in the process of believing…”

“I’m trying on the belief that…”

“I see myself believing…”

In the end, beliefs are thoughts that we think are true… so much so, that we disconnect from their thoughty-ness and slap a sash on them that reads: “Obvious Truth.” And with this sash comes power. We let the belief have power over us… sometimes without knowing. Consider this: Many of our beliefs were formed when we were wee lil tots. Eeek. Now we know that these beliefs formed as lil “helpers” but sheesh, maybe I don’t want beliefs from Jessika’s two-year-old brain running the show up in there, do you know what I’m saying?

It’s good to take inventory of these and rewrite some of the programming that we find.

For every “limiting belief” you find, come up with a “counter medicinal shiny belief” (as the awesome Jeff Hsu calls them).

Another technique you can use to take on new beliefs is by using Havening Touch™. The Creating Possibilities Protocol has you move through several steps starting with “What if…?” What if I was worthy?

You don’t have to believe the knew belief off the bat… You start with “What if…” and progress from there! You can check out this protocol here (YouTube).

Okay… so the long list of limiting beliefs… Are you ready?

I hope you find this post helpful. This writing is geared at personal betterment / personal development… What I find interesting is that in the business world, you will also be taught to heed “assumed constraints.”

“An assumed constraint is a belief you have, based on past experience, that limits your current and future experiences.” – Ken Blanchard

I mention this because you may feel comfortable talking to your friends about “limiting beliefs” and helping them to uncover their own. However, it may feel weird to talk about this in the workplace. Hence, you bring up Blanchard’s book Self Leadership and the One Minute Manager: Increasing Effectiveness Through Situational Self Leadership, and strike a conversation about assumed constraints.