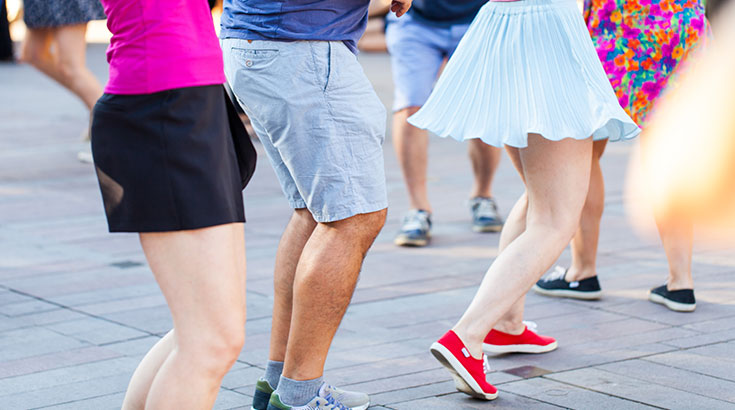 In order to survive, we have to (as Scar says in the Lion King) be prepared. More specifically we need to be prepared to approach or avoid the things that come our way.

Peter Payne and Mardi A. Crane-Godreau have put together a model for what this looks like “under the hood.” They call it the Preparatory Set. Most of the time, before we feel like behaving a certain way, before we even think or know what’s happening (meaning, before we perceive), our subconscious is on the job. A couple of subcortical things that happen include an orientation phase and a subsequent preparation phase. The phases are:

For whatever we perceive in the environment, the response we assemble may be for approach or for avoidance.

Preparatory Sets have 5 aspects, and these assemble like secret flash mobs for us. This is happening without us knowing and involves coordination among many body systems.

The 7 emotional systems that I always yammer on about are part of affective neuroscience (this is the study of the neural mechanisms of emotion). You can see that “Affect” is part of the Preparatory Set: 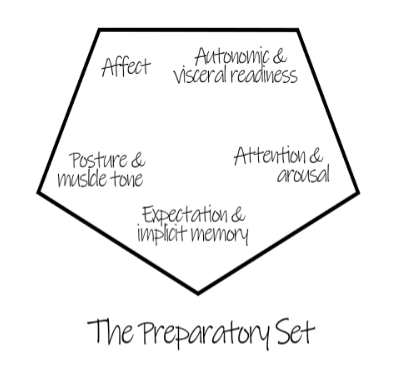 I don’t want to go deep into each of these here — you should read the whole article for funz.

These 5 aspects swoop in like members of a flash mob.

SIDEBAR: If you are not familiar with flash mobbing, it’s when people orchestrate a dance performance amongst the unsuspecting. Here’s an example (below). We flash mobbed Jade when she returned home from her 3 months away at Semester at Sea. Her favorite movie was (probably still is) The Lego Movie, so we used that song and the story’s construction worker theme.

Why am I using  this analogy? Let’s think about flash mobs again for a sec. A flash mob could be:

The Preparatory Set (PS) assembles like a magical flash mob with the goal of getting you ready to handle events. Then, like a good flash mob, it disassembles. A PS may be spot on (assembling and disassembling appropriately), or it may persist inappropriately.

So how would one fix this? Since the PS is primarily subcortical, you’re likely not going to think yourself into a better one.

Whereas with positivity ratios (another topic I yammer on about), you just need to hop on that wagon and you’re golden: Your conscious brain gets to notice more positivity triggers. You get micro-moments of authentic positivity. And by evoking more positives than negatives, you can reach a tipping point whereby your physiological set point is the stay and play (social engagement) state versus a fight or flight state (mobilized, stressed, or what I call ever-stressed mode) or the disappear state (immobilization, shut down). You get to tap into the brighter, “bestest” parts of your brain. (Negativity reduces blood flow to your prefrontal cortex, for example. It also reduces your field of focus.)

But with the PS, when dealing with the other aspects (and even the affect aspect) it seems you have to sneak in the back door to make adjustments and/or to release one that is unhelpfully stuck. I’m basically saying: you can’t really think yourself out of a PS that is persisting inappropriately.

Luckily all of the 5 aspects of the PS affect each other, so you can use Body-Mind Therapeutic Educational Systems (BTES).  For example, you can use posture (posture and muscle tone) to affect the PS.

To release a persistent PS, sometimes (and with professional help), going through biological completion — acting out the action in the orientation-preparation-action chain — often does the trick. This can entail completion of the originally obstructed impulse or defensive action (though in a safe space), or it may entail imagery, or safe reenactment.

The release of a PS may also be helped along by other BTES modalities that don’t directly address the situation that brought on the PS, but rather bring awareness to the PS so that it can be let go of. This is probably why people sometimes bawl during yoga class. Teachers often say “Let it go.” Participants speak of “emotional release” and sudden clarity.  After teaching a yoga class, one of my daughter Jade’s students came up to her and said “I realized during class that I need to get a divorce.” In yoga, there is so much awareness brought to posture and stance. And when I say stance, it is in terms of physical stance, emotional stance, and attitude.

A BTES you may have heard of is the Alexander Technique (which, on first glance can seem like boring slow motion movements… my judgey New Yorker part saw a video on this technique decades ago and was thinking “Why the heck would I want to do that?).  Anyhoo, this is a method for changing the unconscious postural and movement patterns that are a “poor use of the self” (and here “self” means the entire psycho-physical organism) to a more awesome use of the self. Considering the Preparatory Set, when you hear that Alexander Technique has been scientifically shown to benefit things like performance anxiety, it all adds up, right?

BTES’s aim to bring awareness to the sense of the relative position of one’s own parts of the body and strength of effort being employed in movement, as well as the sense of the internal state of the body, attentional orientation, and affective state.

Mt daughter Jade is also a Somatic Educator. She looks for staccatos in movement as she helps her clients come up with new muscular habits — releasing chronic tension. When she sees the staccato, she says “go back” and has her client do it again. One client told her “Every time you told me to go back, I was thinking of the same memory from the past.”

In considering the 7 emotional systems (affective neuroscience) — each of those comes coupled with a tendency towards action, for example, we recoil in fear. If we are constantly recoiling our “body armor” — how we hold our body — can take on a recoiled posture as the norm.

Do you find this fascinating too? Why not try something? Yoga, T’ai Chi, Qigong, Hanna Somatics, Rolfing, EFT Tapping, or whatever you think may float your boat.