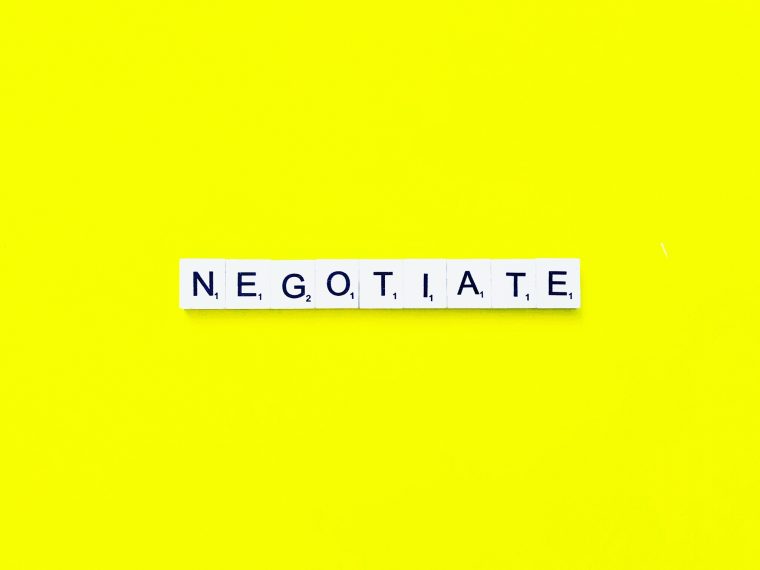 Negotiation is used to settle differences, settle a dispute, or reach a mutually beneficial agreement. Professional negotiations aim for a win-win outcome. This involves compromise… a “give and take.” With win-win negotiations, there is a willingness on both sides to work together to resolve differences (or a dispute) and come up with a mutually beneficial solution. Note that you don’t have to distribute resources equally in a win-win situation. I also think of what Chris Voss wrote in his book Never Split the Difference. It was something like: If he wanted to wear black socks and his wife wanted him to wear brown socks, he wasn’t about to leave the house with one black and one brown. Instead of “splitting the difference,” to achieve success, both parties must feel satisfied with the outcome. The Exam Content Outline for the PMP exam currently lists 1.8.0 NEGOTIATE PROJECT AGREEMENTS. In this context, to negotiate means to obtain a mutually beneficial agreement via discussion. Negotiation is a skill that you’ll want to rock as a PM, and one that you want to nurture and develop in your team members.

Here’s where we back the truck up, all the way back to the Project Charter. Why? Because “ultimate objectives” implies our project’s ultimate objectives. To accomplish the project objectives, guess what? You need to know what they are. 😉 This will likely be something that the project sponsor would draft, and these were ideally included within the Project Charter. Here is what I doodled in the video (above) re-made a lil bit more pleasing to the eye. This is a method that Tom Kendrick, PMP recommends in his book The Project Managemet Toolkit. This book is one of the books that PMI currently lists as a reference book for the PMP exam.

On the exam it’s important to understand the relevance of pre-project documents (aka “business doc”). You want to validate the Project Objective and Priorities with your sponsor during PROJECT INITIATION.

Here’s a behind the scenes look at why your project exists in the first place.

In this part I covered 1.8.5 DETERMINE A NEGOTIATION STRATEGY. Whenever you see the word strategy, this is always the broad approach, highest-level, broadest stroke you can paint. Though this is the last bullet point under 1.8, it’s actually something that would precede the other ECO bulleted items that we just covered. You want to be proactive. Don’t enter a negotiation with the idea that you’ll just “wing it.” Tom Kendrick writes that your negotiation strategy should include objectives, prioritized interests, predefined limits and criteria for decision making. Your negotiation strategy will be your predetermined plan/approach that you’ll follow with the goal of coming to an agreement.

Part 4: Analyze the Bounds of Negotiation for Agreement

In this video I covered 1.8.1 ANALYZE THE BOUNDS OF THE NEGOTIATIONS FOR AGREEMENT. “If you feel like you have no hope-a, just remember ZOPA!” ZOPA is the zone of possible agreement. Since you are all working on this project to co-create value with each other, chances are high that you have some common ground – areas where the terms of both parties involved actually overlap. This is called a positive bargaining zone. On the other hand, when there’s no overlap in agreement when it comes to terms, we call this a negative bargaining zone. This is why you should enter into a negotiation knowing your BATNA – your Best Alternative to Negotiated Agreement. In The Project Management Toolkit, Tom Kendrick writes: “Define the worst results (such as highest price or longest schedule) that you can accept. Use your BATNA to determine this limit.”

I love Sketch Plantations! Here is a great illustration of ZOPA: https://sketchplanations.com/zopa-zone-of-possible-agreement

In this video I discussed 1.8.4 PARTICIPATE IN AGREEMENT NEGOTIATIONS. As a PM you have a code of ethics to follow. You must uphold yourself with honesty and integrity as opposed to resorting to trickery. This means that as PM’s we negotiate in good faith. How can we do that? Well, one thing we can do is to acknowledge that there are barriers that often prevent us from listening effectively. We can address these barriers so that we can do better at active and empathetic listening.

In this video I addressed 1.8.3 VERIFY OBJECTIVE(S) OF THE PROJECT AGREEMENT IS MET. To paraphrase Tom Kendrick, PMP, the Project Objective and Priorities documents the high-level (brief) description of the deliverables that are desired, along with timing and investment information, and including, as we already noted: “explicit definition of relative project priorities.” We always say the m in PM is for manager, not magician… This documentation helps you avoid getting assumed to be a magician. (As in, if all three constraints were fixed, you would need a magician to make it happen, because contraining scope, cost, and schedule as immutable is highly unrealistic.) The Project Objective and Priorities should be set in project initiation and used throughout the project. (Though these are documented in the Project Charter, you would still want to validate them, and perhaps even get your sponsor and other key stakeholders to make decions about which constraints are more important, by playing a game of “What would you rather do…?” along the lines of “..spend more money or come in late?”) Tom Kendrick, PMP, tells us that: A project objective, which is roughly 25 words long, defines the deliverable(s) (scope), the deadline (schedule), and the overall investment (cost).
At the start of your project, don’t be surprised if you need to negotiate the Project Objective and Priorities. In fact, on pmi.org’s learning library, Randall L. Englund cautions: “A definition that often fails to be negotiated, but should be, is the question, ‘What defines success for this project?’” (Source: Negotiating for success: are you prepared? Paper presented at PMI® Global Congress 2010)

Now assuming that success has been agreed upon in terms of objective and priorities, you will go on your merry way with your team to plan the work, work the plan, and make it happen! As the project work is being executed and deliverables are being produced, performance is being tracked, etc, it makes sense to determine whether the objectives have been achieved. As I always like to say, we have poem that doesn’t ryhme and is spealled wrong: POIM. Purpose, objectives, indicators and metrics. Using this
POIM that doesn’t rhyme, we see that goals (objectives) cascade. The organizational, top-level POIM cascades down to departmental POIMS and PORTFOLIO poems… those cascade down to Program POIMS, maybe into sub-program POIMS.. They also cascade down to the project POIM. It’s a true cascade…. a lovely game of connect the dots. Goals cascade down and are interconnected.

Here are some of my doodles made a bit nicer to show the cascade… this game of connect the dots.