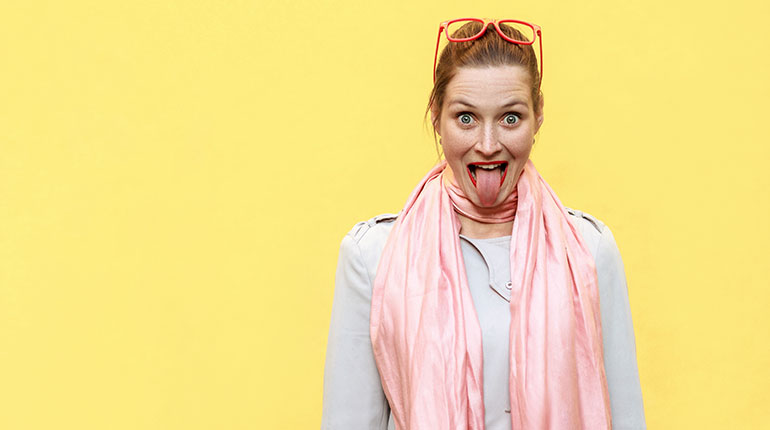 WTF you ask? I have two words for you: Sleep apnea. I’ve always had it. That, and night terrors. As a child I mustered up the courage to tell the doctor that I thought ghosts were trying to kill me in my sleep… I couldn’t move, I couldn’t wake up. I couldn’t breathe. I received some of the best medical care that Long Island has to offer: The doctor laughed at me, and then laughed his way out of the room.

So, I spent decades with this guy (pictured below). In my twenties I went to a doctor who told me I couldn’t have sleep apnea. Sleep apnea was for overweight men with short necks. (Again, Long Island healthcare at its finest.) A witch who sold me an eyeball ring at a flea market told me that it would keep away the evil eye. I ran with this “eyeball” idea, dismantling a full color Blue Dog yearly planner and plastering Blue Dogs all over my bedroom wall. It was genius. Or so I thought… 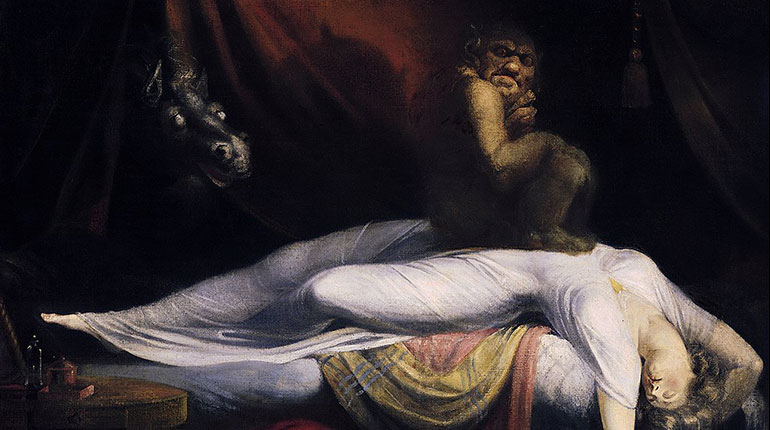 In my early 30’s I borrowed an apnea machine (from an overweight man with a short neck), and though it was set to his settings, I did just fine using it. I decided maybe I needed to see a doctor and went a little more West this time…

Of course I DID have apnea: Moderate during the early parts of sleep and severe during REM sleep. But when I got my own machine, I was unconsciously ripping it off in the night. I would awaken to this snake of tubing spewing mist all over the room. I had no memory whatsoever of taking it off. Zero. And since that machine was a rental, I returned it.

When I moved out to California I left all the eyeballs behind and sought out care again. This time they tried the mouthpiece. It actually really worked for me — on paper (I was in the lucky super-small percent of people who had fantastic results). But in reality, it changed my jaw anatomy very rapidly and I started choking on everything. Once unable to breathe or speak, I was Heimliched at a women’s networking event (in the same series of networking events where I was told “Jessika go get the gun,” and yes, that was a reference to a real gun… my life is pretty ridiculous). When that mouth piece broke, there was no way in hell I wanted a new one.

Time went on and I found myself in my second act of life. Always aware of the heart failure risk that comes with apnea, I was now seeing evidence of this condition causing Alzheimer’s… Still it wasn’t until the WELCOA Summit that it really, really scared the pants off of me. Dr. Amen was showing all his brain scans. I went home and Googled his scans on the Alzheimer’s brains. Yikes! I tried the machine again. It was an APAC (automatic adjusting machine) rather than the CPAC (continuous pressure). This go round with ripping it off I was kind of aware of what was going on. TERROR. But why? I tried to pay attention, control this, look for clues, but the conscious part of the equation was hard to force into the situation. I had the mask on for about 1 hour and never more than 2 (including the time I spent watching Netflix to fall asleep).

A few months later I was chosen to participate in a study for a new device, an implant, that would be like a pacemaker for your tongue, to keep the daytime muscle tension going at night (yes, it came with a remote control to turn it on). This would be the smallest implant. Yay! I thought. Yes, it would be scary to have someone wrap a wire around one of the nerves in my brain, and yes I was never put under before. (Meanwhile you have my dad on the East Coast with 98% blocked arteries in need of a quadruple bypass and an operation to unblock his carotid saying “No, B, I’m good” and heading home, and I’m over here on the West Coast raising my hand “Me! Me! Me!” for experimental brain surgery.) I took one sobering look at the “small” device and I kind of knew that there was no way in pluperfect hell that I would have such a thing in me. BUT… I had to think it through, right? “Since the jaw-Frankensteiner device worked, my tongue was likely the culprit. Heck, I can touch my nose with my tongue. I tried everything else. They wouldn’t keep moving me through the study unless I was a good candidate.”

“But wait a second, you did not try EVERYTHING.” I interrupted myself. “When your friend got hypnotized years ago and never smoked again, you wondered if hypnotism could help you. And your issue is unconscious. You didn’t try everything. You didn’t try hypnotherapy.”

To recap: I went from ghosts, to blue dogs, to a seed that was planted regarding hypnosis. I called my friend who had successfully became a nonsmoker in one session and found out where she went.

Hypnosis reminded me of guided meditation. My therapist had binaural beats going in the background. He explained hypnosis was nothing like the cartoons (so no watch… no “You are getting sleeeeeeeeepy….”) and a lot like when you are in flow, making art, meditating, and so forth. We came up with a list of things to “suggest” to my unconscious mind. And then we did it. I want to say I remember the whole entire process, but who am I to say that?

The results? It worked. No more terror. I keep the mask on a lot longer… and I mean A LOT. 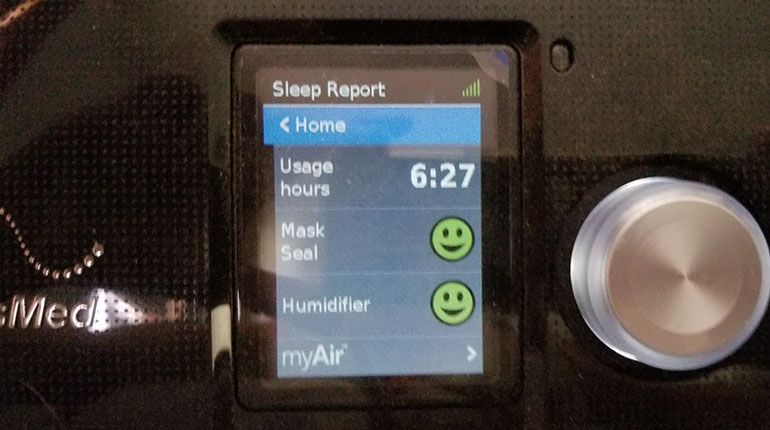 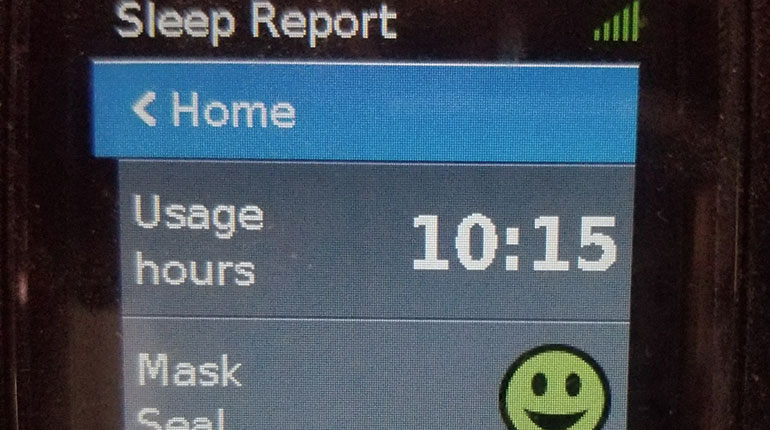 Heh, that second example is from NYE 2017. How the F did I sleep 10+ hours? I don’t know. My NYE festivities involved looping around a block in Gaslamp, popping by the bar across the street from our apartment at 9 p.m.  to watch the ball drop in NY (while 3-way splitting a nonalcoholic beer) and then going home to snuggle with the animals.

I’ve made a lot of progress here. My only issues with keeping the mask on are around drooling, itching, and congestion/allergies. Stay tuned for more on hypnosis and binaural beats. My 2nd Act is filled with such fun stuff to learn! 😉